There is a common misconception regarding the design of public space that doing a compromised design is better than no design: “At least it’s better than nothing”. The problem with this approach is that with a less than optimal designs you create cues that incentivize the use of a space that provides a negative experience feedback to the users and isn’t any safer while sometimes less safe. 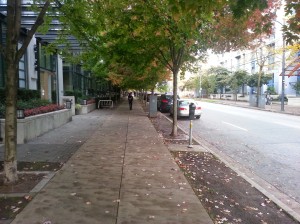 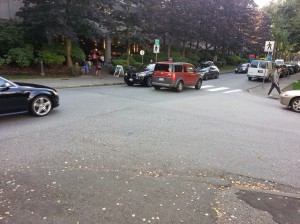 The left photo about shows a wide sidewalk with trees and a set-back including parking lane between the pedestrians and the moving lane of traffic. The design provides a smooth wide surface that guides pedestrians down the street within a treed hallway. A very pleasant walking experience.

The right photo shows a crosswalk on one crossing that leads to a wider crossing with no crosswalk. The vehicles are given a disproportionate amount of unnecessary space with pedestrians pushed to the edges. The crosswalk is jarring to the overall uncontrolled intersection use. “walk here. it is safe.” However, the parking, turning, and trough cars dominate the space creating an uneasy experience.

Another important aspect of designing pedestrian public space is the diversity of users. How would a person with a walker, a stroller, a wheelchair, or slow walker use the space?

The worst design ever is sharrows. Sharrows are put on streets where no improvements have been made such as added space or separation from traffic for cyclists, but cyclists are guided to these spaces. The idea is if people know cyclists are using the space by the paint on the ground cars will be aware. The statistics show that is very unsafe for cyclists.

The right picture is a good multi-directional separated bike land that ends poorly. The lane does not continue despite cyclists needing to continue and when they do they are just riding in traffic. Turing right is also confusing as oncoming cyclists from the right are coming from the middle of the street while it is unclear where the right-turning cyclsits are supposed to go to the middle or stay right. This is known as a gap in the bike network where there is no or a poor connection from one route to another. Gaps are problematic as they dump cyclists into spaces that are unsafe despite the rest of their route being well-design. Gaps are a deterrent to cycling. 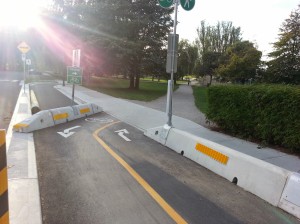 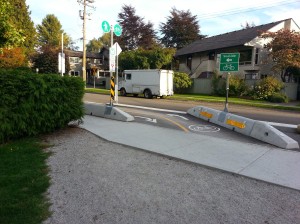 Bike infrastructure designed correctly improves the pedestrian realm. A separated bike lane often provides a greater buffer between moving cars and the sidewalk, improved planters, and even wider sidewalks. However, shared spaces must balance the how each mode uses space.

The pictures above show how cyclists cross a sidewalk with limited vision at an angle. The issue here is the speed of cyclists is fast enough that there is not enough time to stop. Pedestrians also can walk into oncoming pedestrians. The argument that cyclists should slow down is a red-herring as the design appears to show the path ahead when there is another path out of sight. The cycle track should be realigned to its original design. Cyclists would make the turn away from pedestrians merging and join the trail with time to adjust speed and position. This would improve both the pedestrian and cycling space. The space before the new cycle track was safer at this corner. As such nothing would have been safer.